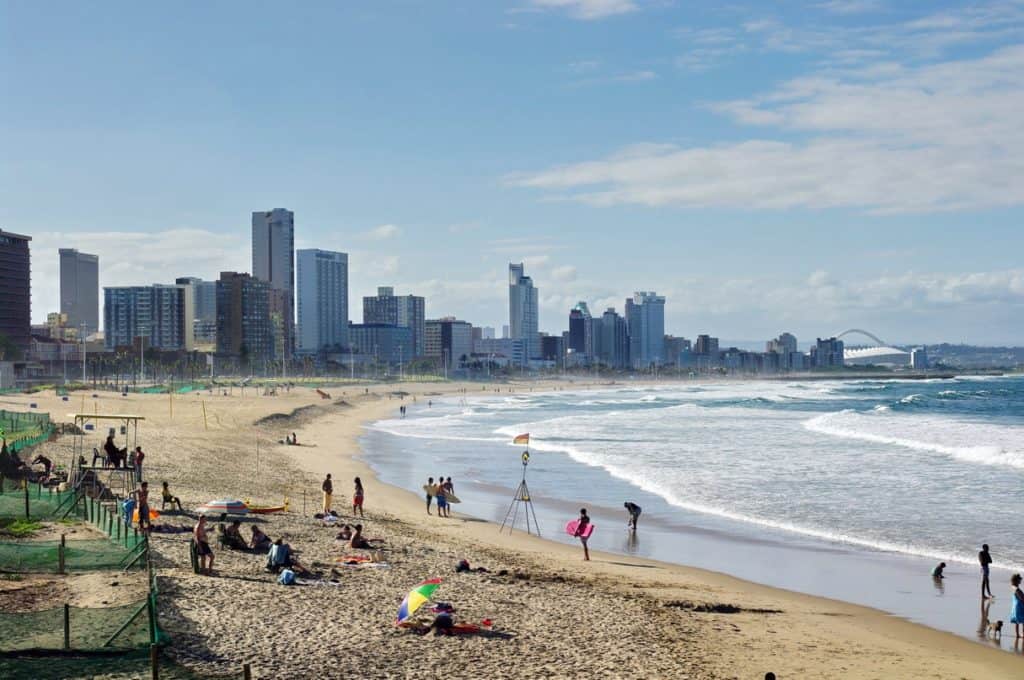 Durban is the largest city of the KwaZulu Natal province and is the main seaport of South Africa located on Natal Bay of the Indian Ocean. Durban was founded in 1835 and is one of the fastest growing urban areas in the world, it’s port is one of the ten largest in the world.

Durban is often referred to as the Miami Beach of South Africa surrounded by holiday accommodation, five star hotels and luxury apartments overlooking a picturesque view of the Indian Ocean. It is also known for its African, Indian and Colonial influences.

The land of Durban was a gift from King Shaka Zulu in the 1830s before history was recorded and was inhabited by the Khoi/San. In 1497 Vasco da Gama Portuguese explorer, passed by the mouth of Durban and named it Rio de Natal. Explorers and traders were the only people visiting the bay as it was a safe place to anchor, and remained underdeveloped. This changed in 1823 when the first European settlement took root, a storm forced two British trading ships to anchor in the bay, this is when the crew of the Salisbury saw potential this safe anchorage had for the British. The Captain became friends with King Shaka Zulu, who gave him land around the bay, in 1835 the number of people who settled were 15 settlers and proclaimed to have founded a town, and called it Durban.

Durban’s main suburbs include the following:

Queensburgh is a quiet and peaceful, residential area that appeals to young couples and the eldery as it is an inexpensive area to live. Public transport is also very convenient for locals.

Upmarket Umhlanga has been the choice of many who previously lived inland and now want to live near the beach, as the beach is right at your doorstep along with malls and shopping centres minutes away. Umhlanga is a good lifestyle for those who would like to retire, business people on the go and for young trendy students.

Westville offers a variety of different property types, sizes and styles, the area appeals more to family oriented residents, however it also appeals to young professionals, singles and the elderly who appreciate a quiet, peaceful neighbourhood.

Durban is home to the Moses Mabhida Stadium, which offers activities for fun seekers, you can go on a SkyCar ride to the top of the arch, walk 500 steps to the sky platform on the Adventure Walk as well as the Big Swing for the thrill seekers and not forgetting that there is also a variety of shops and restaurants.

Minitown is a mini city based in Durban, it is one of Durban’s iconic beachfront tourist attractions and is the exact replica of Duban. It is an amazing place to take the children, the buildings reach just above knee height and provides you with a perspective that you cannot appreciate when walking through Durban, it almost looks like a little toy land for children.

Need to unwind and relax? Botanic gardens is the place to go, the ground also hosts various social gatherings, such as local music bands, Victorian tea parties as well as an indeginous plant fair in spring. There are also large plant collections that you can enjoy viewing while taking a stroll in the gardens.

St. Mary’s Diocesan School for Girls, and Kearsney College are well-renowned private schools and are both English medium schools, public schools are Berea Primary, Durban Primary and Brettonwood High School which are all very good schools.

Werda a Afrikaans and English medium school on the border of Queensburgh in Durban was established in 1961 and is a sought-after school.

There are an abundance of private hospitals in Durban, just to mention a few Entabeni Hospital, Parklands Hospital and Westville Hospital which are all very good hospitals not forgetting that there are also several good government hospitals.

The Pavilion is the second-largest shopping mall in South Africa located in Westville close to Durban and is one of the largest in South Africa with many restaurants, shops and a mere 33 minutes away is the Bergtheil Museum for history lovers.

Gateway shopping Mall is a very popular mall and  is situated in Umhlanga where there are an abundance of shops and departmental stores for example: Musica, Typo, Edgars, Game and many boutiques for the exclusive shopper. Right next to Gateway is the Gateway Hotel which is very convenient if you want to enjoy a movie and do some shopping, it is only 20 minutes away from King Shaka International Airport.

Durban is home to many large businesses, Unilever’s Head office is based in Durban and is one of the world’s leading suppliers of Beauty and Personal Care, Home Care and Foods, and Refreshment Products.

Due to the International airport and the Port, Durban is well connected when it comes to business.