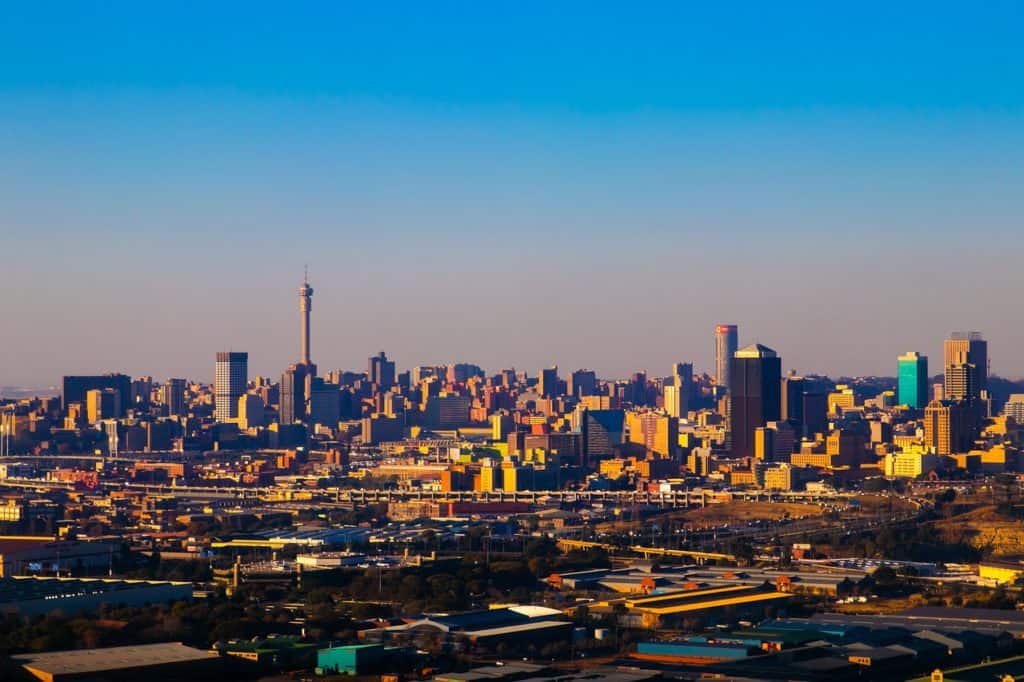 The Johannesburg Metropolitan area is divided into 5 regions: the North, West Rand, East Rand, Midrand and the South. The West Rand has traditionally been a working class, mining area while the North is a very affluent, upper middle class region. The East Rand has a lot of industry and is home to South Africa’s largest airport: OR Tambo International Airport. Southern Johannesburg features rolling hills and well-priced properties, while Midrand is conveniently close to Pretoria with many new business and residential developments. Sandton is the city’s economic hub and a prestigious place to live. The city has a wealth of shopping options, notably the Mall of Africa which is the largest mall in Africa. Residents enjoy relaxing in the city’s many nature reserves and parks, such as Emmarentia Dam and Suikerbosrand and there is the modern Gautrain system offering trains and buses throughout the city.

Founded in 1886 as a result of gold discovery, Johannesburg was initially a temporary settlement. The 20th century saw it become the country’s largest city and economic hub, with large corporations and industries flourishing. After the abolishment of apartheid, Johannesburg became a diverse and culturally-rich city and is today a bustling and energetic place to live

The main regions around Johannesburg Metro include the following:

The West Rand was historically a working class, mining area and mostly Afrikaans-speaking. Today, it is more diverse and offers excellent value for money in terms of property.

Northern Johannesburg has always been the most affluent region. It includes Sandton, which is regarded as the richest square mile in Africa due to the many local and international companies based in the CBD.

The vast East Rand includes suburbs such as Benoni, Kempton Park, Boksburg and Brakpan and is where much of the country’s industry is based. It is home to OR Tambo International Airport and boasts the modern Gautrain system and extensive highways.

The South of Johannesburg gives residents a quiet and relaxed life with large homes on the many rolling hills and panoramic views.

Midrand is Johannesburg’s fastest growing region and is conveniently located halfway to Pretoria. There are always countless new residential and business developments and it has Africa’s largest shopping mall: the Mall of Africa.

There is no shortage of things to do in the Johannesburg Metro area. The Lion and Rhino Park, zoo and Emmarentia Dam are great options for families, while culture-seekers enjoy the Apartheid Museum, Maboneng and the many theatres.

For a taste of nature, head over to Suikerbosrand, Norscot Koppies, Marievale or Kloofendal nature reserve for a relaxing picnic or challenging hike.

Johannesburg is recognizable by the many unused gold mine dumps and beautiful Jacaranda trees, which come into bloom each spring.

Parents are spoilt for choice for schooling options in Johannesburg. There are excellent government and private schools throughout the city, as well as 2 large universities (WITS University and the University of Johannesburg).

Johannesburg has the southern hemisphere’s largest hospital: the Baragwanath Hospital, which is a great government facility. Great private hospitals include Milpark, Olivedale and Garden City Clinic.

You will be hard-pressed to find a shopping mall you don’t like in Johannesburg. The world-class Mall of Africa is the largest on the continent, while Fourways Mall is a close contender.

Discovering exclusive designer labels is easy at Sandton City and bargain hunters love the informal traders in the Johannesburg CBD who offer anything from clothing, accessories and delicious street food.

Johannesburg has the modern Gautrain system which has stations in Sandton, Rosebank, Johannesburg CBD, Kempton Park and OR Tambo. There is also an extensive Gautrain bus route from all stations and along the major roads.

Most large corporations have offices in the prestigious Sandton CBD. These include the likes of the Johannesburg Stock Exchange, Discovery Health, Sasol and Rand Merchant Bank.

Much of the city’s industrial activity happens on the East Rand where there are numerous modern factories and warehouses.

The Johannesburg CBD features luxurious Bank City, First National Bank’s head office which takes up several blocks. It has recently been gentrified and some businesses have moved back into the area, while others opt for affordable rentals on the West Rand or in the South.