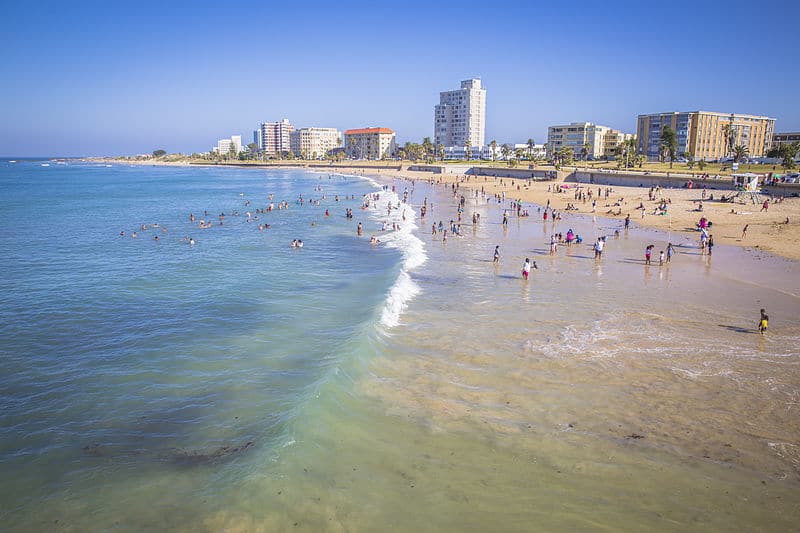 Situated on Algoa Bay in South Africa’s Eastern Cape Province, Port Elizabeth has a major port and is well known for its many beaches. Port Elizabeth is the sixth most popular city in South Africa, east of the garden route, facing the Indian Ocean. P. E. as everyone calls it is known for many blue-flag beaches along the city’s urban coastline and is very popular among international and local holiday makers. P. E. also became the host city for the 2010 FIFA world cup.

In 1820 Port Elizabeth was established as a British settlement around Fort Frederick (the oldest British building in southern Africa) and was integrated as a town in 1861. The acting governor of the Cape Colony, Sir Rufane Donkin named the town after his deceased wife Lady Elizabeth. Port Elizabeth became a city in 1913, after completion of the Kimberley Railroad (1873) this motivated development of the port. In 2019 Port Elizabeth was renamed Gqeberha, after the Xhosa and Southern khoe name for the Baakens River that flows through the city.

Listed below are the main suburbs of Port Elizabeth:

Summerstrand, an upper-class suburb known for the Boardwalk Casino and the long stretch of beach perfect for walking, biking or jogging. It is home to the Summerstrand Village shopping mall and long Shark Rock Pier, not forgetting the Humewood Golf Club with beautiful ocean views.

Humewood is a classy mostly residential neighborhood known for its leafy streets, lined with low-rise homes, and hotels ranging from free and easy to chic, it is also dotted with many casual bars and eateries serving pub style food.

Port Elizabeth Central is a lively area and is known for its stylish bars and global eateries. Port Elizabeth is home to many more suburbs that are sought-after and have a lot to offer to anyone living there or wanting to live there.

Kragga Kamma Game Park a lush coastal forest and grassland is home to vast herds of African game, including White Rhino, Buffalo, Cheetah, Giraffe, Zebra, Nyala, Bontebok, Lechwe and many more species, you can take a drive in your own vehicle through the park on the well-maintained roads. For those history lovers there is the Horse Memorial, dedicated to the horses killed during the South African War (1899 to 1902) and is situated on the corner of Russell and Cape Roads. Situated in the picturesque suburb of Kragga Kamma is the Holmeleigh Farmyard where you can take the children for the day where they can run free in a safe environment and just 6.28 km away is the tranquil Thunzi Bush Lodge where you can go and stay for a weekend away.

The South African city of Port Elizabeth has 175 schools in total, all in suburbs and townships so when it comes to education there is an abundance of schools. Nelson Mandela University is the largest university in the Eastern and Southern Cape with around 29.000 students in seven faculties spread over seven campuses. Russell Road College and AFDA also have campuses in the city.

The Walmer Park Shopping Centre is a great shopping mall to enjoy shopping at some of the well known retail shops. There are many brand shops as well as boutiques and when you need to take a break from shopping you can head to the theatre at the mall and watch a movie or simply sit at the restaurant and have a cup of coffee.

The Baywest Mall has a host of things you can do, there is ample parking and multiple entrances. The best part about the mall is when the children are tired of walking from shop to shop you can simply drop them at one of the playstations. The Baywest Mall is your one-stop destination for all things fun!

If you love shopping, you need to visit Greenacre Shopping Centre, as there are some amazing shops and places to eat so that you can have a break before continuing to shop.

MetLife Mall Shopping Centre has all the items you need, it is a small convenient shopping centre which comes to the rescue when you have forgotten something while on vacation.

The Cleary Park Shopping centre covers most of your shopping needs, it is very well constructed and maintained. Pricing of all goods is reasonable and tourists love the place as it has so much to offer.

There are plenty of major businesses in Port Elizabeth such as Discovery, Bloomberg, Marriott International, Vodacom group, Standard Bank Group and the city boasts most motor vehicle assembly plants, General Motors, Ford, Volkswagen and Continental tyres and many more.